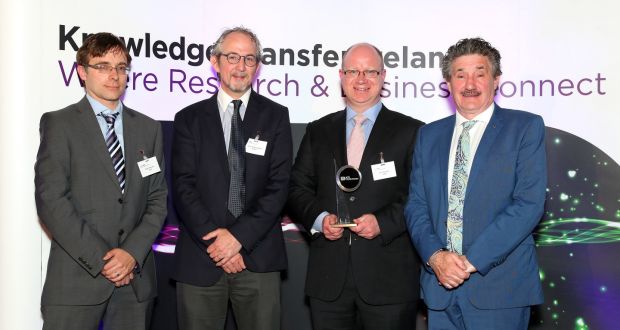 The University College Dublin and ENBIO team of Hugh Hayden, John O’Donoghue and Ken Stanton that won the KTI Impact Collaborative Research Award with Minister of State for Training, Skills, Innovation, Research and Development, John Halligan. They won the award for the development of a coating for deep space travel . Photograph: Marc O’Sullivan

University College Dublin was awarded the “Collaborative Research” award for its work with ENBIO that helped the company to develop a thermo-optical coating to reflect radiation and protect spacecrafts.

University of Limerick won the “Consultancy Impact” award for its role in the development of a software application for Xtract 360 Ltd to re-create a car crash in real time to deal with undetected fraudulent insurance claims.

The Royal College of Surgeons Ireland was awarded the “Spin-out Company” award for SurgaColl, a medical device company that supplies tissue regeneration products for surgical treatment.

The awards were presented by John Halligan, the Minister of State for Training, Skills, Innovation, Research and Development, who said the Government has taken a “pro-active approach” to encouraging and supporting research-based innovation.

KTI was established in 2013 as a partnership between Enterprise Ireland and the Irish Universities’ Association and helps enterprises access publicly-funded research.