The degeneration and death of brain cells that regulate movement is what affects the ability of a person with Parkinson’s to control movement. 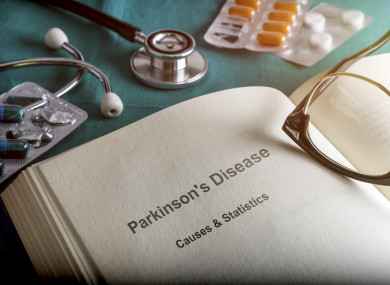 NEUROSCIENTISTS AT NUI Galway have made a breakthrough in regenerative medicine approaches to Parkinson’s disease.

Parkinson’s is a condition that primarily affects a person’s ability to control movement leading to a progressive deterioration in ability.

The symptoms of the condition are caused by the degeneration and death of brain cells that regulate movement.

Brain repair for Parkinson’s involves replacing the dead cells by transplanting healthy brain cells back into the brain, but the widespread roll-out of this therapy has been hindered by the poor survival of the implanted cells.

The research, which was published in the Nature journal, Scientific Reports this week, found that the survival of the transplanted cells is dramatically improved if they are implanted within a supportive matrix made from the natural material collagen.

It was carried out by a team at the Galway Neuroscience Centre and CÚRAM, the Science Foundation Ireland Centre for Research in Medical Devices, based at NUI Galway.

The collagen provides the cells with a nurturing, supportive environment in the brain and helps them to survive the aversive transplant process.

The work will be presented at the upcoming Network for European CNS Transplantation and Restoration (NECTAR) conference which is being hosted by Dr Dowd in Dublin from the 6–8 December.

The event will feature leading scientists from the US, Canada, Australia, Belgium, Denmark, France, Ireland, Sweden, Switzerland and the UK, who will present their latest research on brain repair for Parkinson’s, Huntington’s and Alzheimer’s.