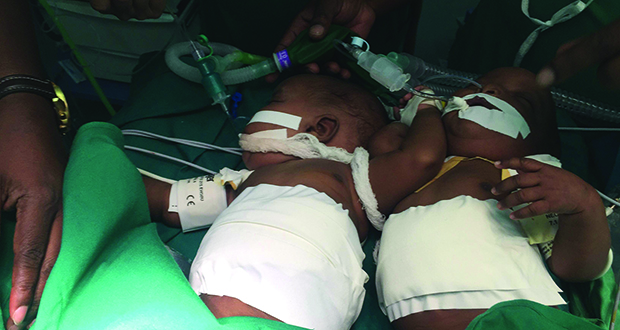 Since a group of top Irish doctors and surgeons accepted an invitation from the Christina Noble Children’s Foundation, some 15 years ago, to treat children in Vietnam and to share their clinical skills, their efforts have grown into a charity called Operation Childlife.

The involvement of a large group of volunteer Irish doctors, surgeons and nurses began with the invitation from the Foundation to Dr Brendan O’Hare, Consultant Paediatric Anaesthesiologist and Intensivist and Prof Martin Corbally, Chief of Staff and Consultant Paediatric Surgeon, at Bahrain’s King Hamad University Hospital to help Vietnamese children with congenital absence of the rectum and anus in 2003 to 2004.

Prof Corbally is also Professor and Chairman, Department of Surgery, Royal College of Surgeons in Ireland-Medical University of Bahrain (RCSI-MUB).

“Initially, we sent a small team to the Children’s Hospital 2 (Bệnh Viện Nhi Đồng 2) and began, over two years, to demonstrate anaesthetic, surgical and nursing techniques for children born with no anus and or rectum,” Prof Corbally said.

“We treated about 50 such patients over two years. From that point, and with the development of mutual trust between us and the local teams, we increased the complexity and range of conditions. This included thoracic procedures, oesophageal replacement for failed neonatal surgery or caustic ingestion.”

“We found staff eager to learn and practise the techniques we demonstrated and, after three years, they were more than competent themselves.” he added.

The Irish involvement grew after his initial visit when he realised it was possible to make a positive contribution. Prof Corbally has continued as Programme Director of Operation Childlife, since his move to the King Hamad University Hospital in Bahrain some years ago.
“I just asked my colleagues if they would be happy to give up a week or two every year to contribute. No one said ‘no’ and I think that we have all come to understand that we were all lucky to have the opportunity to contribute to this. We get a huge return from our engagement.” 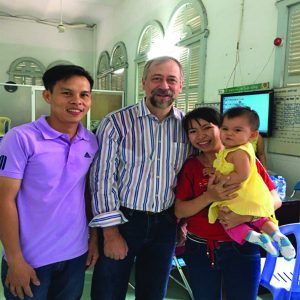 Prof Martin Cobally with one of the first oesophageal reconstruction patients, now married, and her daughter.

Operation Childlife was not formally launched until around 2010-2011 but the medics had been working in Tanzania since 2008, and in Vietnam from 2004. They formed Operation Childlife as an Irish registered charity to help raise funding in an official and transparent manner. Such funding would enable volunteers to travel to Vietnam and Tanzania.

Prof Corbally said: “Our aims are primarily to share paediatric, surgical, anaesthetic and nursing skills with our colleagues in both Vietnam and Tanzania and, in so doing, contribute to the health of families and children. Many of the procedures that we are involved with are complex but we see our role as participating in care at all levels, from simple issues to quite complex ones.”

He added that every interaction whether in outpatients, on the ward, intensive care unit or theatre, offered the potential to increase experience and training. A good example of how this had worked was the open heart surgery and interventional cardiology programme in the Children’s Hospital 2 (Bệnh Viện Nhi Đồng 2) in Hồ Chí Minh City, in southern Vietnam.

The vast majority of their patients in Vietnam were from very impoverished families and were supported by the Christina Noble Foundation in Hồ Chí Minh City. Prof Corbally added that the Foundation had been their major sponsor over the past five years.

They did have funding for three years from Irish Aid which had allowed significant expansion, and when that had run out, the Christina Noble Foundation had stepped in to sustain the programme which had been very successful. Their Lives Matter in Tanzania
had also contributed to the programme in Tanzania.

Programmes
With funding provided by Irish Aid, the cooperation of Our Lady’s Children’s Hospital Crumlin, and through the work of Prof Mark Redmond (Consultant Cardiothoracic Surgeon), Dr Paul Oslizlok (Consultant Cardiologist), Prof William Casey (Consultant Paediatric Anaesthesiologist and Intensivist), and Dr O’Hare, the charity was able to train Vietnamese cardiologists, cardiac surgeons, intensivists, nurses and perfusionists so that, by 2010, the hospital’s cardiac programme had opened.

Up to that point, Prof Corbally said that more than 500 children died each year in Hồ Chí Minh City alone because of a lack of access to early and effective intervention. “They are fully efficient at open heart surgery and interventional cardiology now and do up to two open heart cases each day,” he told Irish Medical Times.

“After we opened the open heart surgery programme there in 2010, we agreed to help with the provision of care for children with cancer. We were also able to bring surgeons and nurses in other areas — surgery and orthopaedics — to Dublin for training.” This model had now been extended to include Bahrain, where Prof Corbally is based, and King Hamad University Hospital will accept three doctors from City Children’s hospital in Hồ Chí Minh City this coming February for training.

He said the work of the charity was funded entirely on donations they received from the Christina Noble Children’s Foundation in Vietnam, Their Lives Matter Tanzania and what they generated “from the occasional lunch or cycle”.

This funding paid for economy air tickets to Dar es Salaam (Tanzania’s former capital as well as most populous city) and Hồ Chí Minh City, and for accommodation while there. It did not pay for visas or living expenses. “We run the charity for around €20,000 to €25,000 per annum and our only other expense is the annual audit. There are no other expenses and our volunteers donate their time freely. Considering the work we do, it is very cost-effective. Our commitments have continued to grow and we are always open to donations,” Prof Corbally added.

They had just signed a Memorandum of Understanding with the latest hospital, City Children’s Hospital in Hồ Chí Minh City, and hoped to increase their involvement there, while still delivering on their commitment to the first Hồ Chí Minh City children’s hospital they worked with — Nhi Đồng 2 — as well as in Tanzania, where they became involved at the invitation of Dr Trish Scanlon, “a remarkable Irish oncologist” who had devoted her life to improving cancer care for children in Tanzania.

Sharing
“Our essential purpose is to share skills and knowledge in a clinical platform,” Prof Corbally mentioned. “We work in paediatric hospitals or a paediatric department of a major hospital so the age limit is generally 14 years.”

The charity has been strongly supported by a large number of Irish doctors and nurses but also by the Royal College of Surgeons in Ireland and Our Lady’s Children’s Hospital Crumlin.

“We brought equipment with us initially but it is becoming less of a requirement, especially in Vietnam. What generally happens is that we identify dates that suit our volunteers and the local teams.”

Lists of patients, he said, are identified and discussed via Skype and email. A formal list is generated and the visit arranged.

“We start the week with a busy clinic seeing new patients scheduled for surgery and follow-up of previous patients. The weeks are generally quite busy, starting early and finishing late.”

Policy, mantra, model
Prof Corbally said: “We follow-up all patients by email, telephone or Skype with the local teams. Our policy is to return in the event of any unexpected negative outcome but we have never had to do so.”

“There is a global mismatch in healthcare and currently over six billion lack access to safe surgery. The lessons we have learned over the past 14 years in Vietnam, and 10 years in Tanzania, is that practices can be changed when there is a continued presence and long-term commitment to achieving a common goal.

“The mantra ‘no one should be left’ behind, rings well with us and all of Operation Childlife’s volunteers are committed to sharing their knowledge and skill,” he added. “Our aim is not to do complex surgery/procedures and leave but to upskill local teams in all areas of care, nursing, anaesthesiology surgery and so enable and empower them in these areas,” he added.

He said the model had worked “very well” in Vietnam and had started to show “very positive results” in Tanzania. Progress could be slow at times but part of their policy was “never to dictate but always to demonstrate”.

“We are at all times sensitive to local needs and try to work within the framework of what is available,” Prof Corbally said.

Volunteers
Many people had become involved in the work in Vietnam and Tanzania, and set up services including: Prof Redmond who set up a paediatric cardiac surgery programme, for all ages, at; Dr Oslizlok a paediatric cardiology/echo/minimally invasive programme (for all ages); Mr John Russell, an airway reconstruction programme (for all ages); Ms Patricia Early, paediatric plastic reconstructive programme; Dr Mark Ryan, interventional radiology programme; Dr Anne O’Meara, paediatric oncology; Dr O’Hare, paediatric anaesthesiology across all specialties; and Prof Casey, paediatric anaesthesiology across all specialties, all of them at Nhi Đồng 2 children’s hospital (ND2) Hồ Chí Minh City.

There were also other doctors based in Cambodia, Hồ Chí Minh City, Bahrain, Italy, and Muhimbili Hospital.

Education platform
Prof Corbally said their education platform is currently delivered through hands-on real-time teaching in outpatient departments, the wards and theatre. They work with their Tanzanian and Vietnamese colleagues to provide real-time training.

“We are currently looking as to how we may engage and support paediatric life support teaching in conjunction with some dedicated Irish nurses. We have brought approximately 30 to 35 Vietnamese doctors and nurses to Dublin to train in ICU, theatre, cardiac surgery, oncological surgery especially in the lead up to the opening of the open heart/cardiac programme in 2010,” Prof Corbally said.

As the charity expanded its commitment, they had greater need for doctors and nurses with a very specific skill mix. “Our greatest limitation is funding and we are usually scraping the bottom of the barrel at the end of each year,” he said.

“I think that the majority of doctors and nurses would be delighted to give up some time to contribute to a humanitarian effort but it is not easy to do so especially when we know that there are staff shortages. What needs to be realised however, is that the experience we gain in dealing with complex disease or problems that are somewhat rare in the West increases their ability to treat patients at home,” and Prof Corbally urged the Health Service Executive to make this an “easier process”.

By: Valerie Ryan of the Irish Medical Times