New Trinity Chancellor to Be in Place by Christmas

Trinity will have elected a new Chancellor by the end of 2020, to replace Mary Robinson, whose term finished in June.

In an email to The University Times, Aoife Crawford, the Administrative Officer in Trinity’s Secretary’s Office, said that “the process to appoint a new Chancellor (and two new Pro-Chancellors) will be conducted in Michaelmas term and a new Chancellor is expected to be in place before Christmas”. 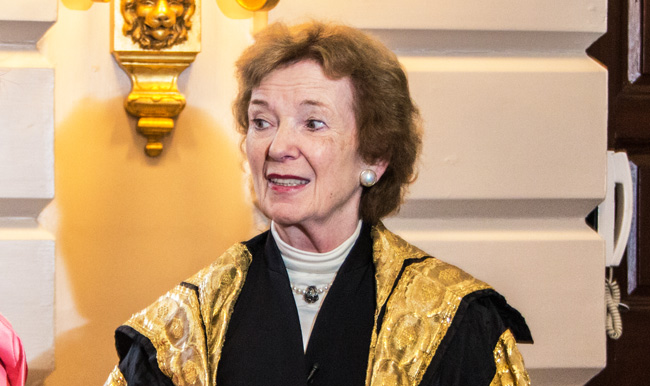 An election will be held during the coming term if more than one candidate emerges.

As Chancellor, Robinson was the head of the University of Dublin. She presided over ceremonial occasions in the College such as commencement ceremonies, and officiated at honorary degree ceremonies.

The Chancellor’s other responsibilities include interpreting the College Statutes and hearing appeals against decisions of the College Board.

Robinson, a former President of Ireland, was elected to the position in 1998.The first female Chancellor since the founding of the College in 1592, she was elected a Scholar of Trinity in 1965 and graduated with a first-class honours degree in law in 1967. She served as a Senator for the University of Dublin from 1969 to 1989.

Robinson, an outspoken campaigner for action against climate change, will now take up a new role in College as an adjunct professor of climate justice in the School of Natural Sciences.

Robinson has said that the climate crisis is “a man-made problem with a feminist solution”. The Mary Robinson Foundation for Climate Justice facilitates action to achieve sustainable development, particularly for those in poor, marginalised areas that are most vulnerable to the effects of climate change.

Speaking at the Royal College of Surgeons in Ireland in February, she encouraged people to “get angry” at the government’s failure to act to resolve the crisis.

In February, Robinson launched Trinity’s Green Week. Speaking at the launch, she said: “The great thing about what’s happening in this university is students are being very active. I loved the campaign on divestment. I supported it.”

In May, a portrait of Robinson was commissioned for the Dining Hall.

Robinson also became embroiled in controversy this year after commenting on the case of Dubai Princess Sheikha Latifa.

She was criticised by human rights advocates all over the world for calling the princess, the daughter of Dubai ruler Sheikh Mohammed bin Rashid Al Maktoum, a “troubled young woman”.

Robinson said she had been invited to Dubai by Princess Haya, one of Sheikh Mohammed’s six wives, to help with what Haya called a “private family matter”.

Several weeks later, however, Haya made headlines after reportedly fleeing Dubai and seeking asylum in Europe.