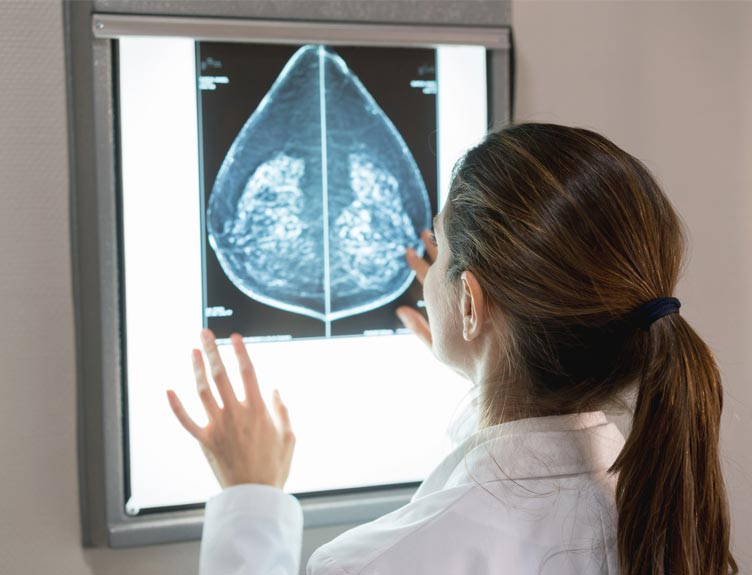 Two RCSI researchers have been granted emerging investigator awards by the Health Research Board (HRB). The awards, which total a combined €1.4 million, will fund research that will look at breast cancer risk factors and clinical guidelines.

The grants were awarded to Dr Barbara Clyne, Postdoctoral Researcher and Honorary Lecturer in the Department of General Practice and Dr Maeve Mullooly, Research Fellow in the Division of Population Health Sciences.

The work led by Dr Mullooly will examine breast cancer risk factors, with particular focus on a risk factor known as mammographic breast density (MBD). The research will improve knowledge on how this risk factor influences tumour aggressiveness and contribute to better detection of women at high risk of the disease.

The research led by Dr Clyne will aim to develop a toolkit to help the development of Irish national clinical guidelines. The toolkit will equip members of National Clinical Guideline Development Groups on how to select the best approaches to evidence synthesis. The project will also explore how the results of evidence synthesis methods are presented and how guideline development groups use this evidence to develop recommendations.

The Health Research Board (HRB) emerging investigator awards are designed to create a pipeline of researcher leaders who will improve health, influence clinical practice and inform health policy across a broad range of areas.

Speaking on the research grants, Professor Ray Stallings, Director of Research and Innovation, RCSI, said: “These grants will help us continue our mission of leading impactful health research and exploring improvements in breast cancer diagnosis and the development of clinical guidelines . I congratulate Dr Clyne and Dr Mullooly on their achievement of securing funding, which is a testament to the high quality of their research, and I look forward to the results of their studies.”

“We want this investment to advance the skills and expertise of researchers, while at the same time generating research outcomes that have strong potential to impact on people’s health, patient care or health policy,” according to Dr Darrin Morrissey, Chief Executive at the HRB.

In a highly competitive process, a total of 11 awards were selected by an international panel from 45 eligible applications.

“This programme of funding will ensure that researchers can take the next steps in their research career as independent investigators, demonstrate leadership potential and build a complementary support team. All successful applicants in winning funding demonstrated a strong research vision and identified a career path beyond the duration of the funding award which is very promising for the future of health research in Ireland,” said Dr Morrissey.

Increasing obesity, consumption of fructose, and alcohol may be contributory factors, say researchers

One in four people in the Irish health system have elevated blood levels of uric acid, according to a new study led by researchers at the Graduate Entry Medical School (GEMS), University of Limerick. The largest study of its kind in Ireland has found that Uric Acid levels here increased at an ‘alarming’ rate from 2006 to 2014.

Uric acid has been linked with a range of conditions from gout to kidney disease.

In a Health Research Board supported study of over 128, 000 patients in the Irish health system, researchers found that uric acid levels increased by 21 per cent over a nine year period, with increases seen in all age groups from young adults to the very elderly.

Uric acid is a by-product of the body’s metabolism and is associated with conditions such as heart disease, high blood pressure, stroke and kidney disease.

The researchers used data from the National Kidney Disease Surveillance System, based in UL’s Graduate Entry Medical School, to track the levels of uric acid in patients from 2006-2014 in the midwest and northwest regions.

“What we found was astonishing,” says Professor Austin Stack, Principal Investigator for the UL Kidney Health Consortium and a senior author of the study.

While this was not a national random sample, it included a very large group of patients from all demographics within the health system. “We identified rising levels of uric acid in every subgroup of patients and in all clinical settings between 2006-2014; whether they attended outpatient clinics, were hospitalised as inpatients, or visited their GP in general practice,” says Professor Stack.

Uric acid is a waste product and produced when the body breaks down ‘purines’ found in many foods, drinks and alcohol. About 30 per cent of uric acid production is attributable to diet and lifestyle factors such obesity and food intake, especially foods containing fructose such as sugary drinks.

“There is increasing evidence to suggest that high uric acid levels may be a causal factor in kidney disease,” says Professor Austin Stack. “Each year in Ireland around 400 people start on dialysis for kidney failure. However, kidney disease is detected in around 15 per cent of all patients entering the Irish health system.”

Uric acid is also a cause of Gout, a common arthritis when uric acid crystals build up in the joints.

“In addition, and possibly even more concerning, high levels of uric acid are directly linked to the development of several major diseases including high blood pressure, diabetes, kidney disease, heart attacks and strokes,” says Professor Stack, who is Foundation Chair of Medicine at GEMS and Consultant Nephrologist at the University Hospital Limerick. “Rising blood levels of uric acid mean that more patients are at risk of these serious conditions.”

This is the first study of its kind to be conducted in Ireland, but previous studies in the UK, US and in Europe have identified similar marked increases.

The increases have taken place too rapidly to be explained by genetic changes, says Professor Stack. “These steep increases in a nine year period are more likely to be linked to lifestyle factors. Excessive uric acid production is a biochemical signal that something is going wrong with the body.”

Lead author of the study Dr Arun Kumar, a clinical tutor at GEMS and researcher in the UL Kidney Health Consortium, commented on the rate of growth in uric acid concentrations. “In real terms levels of uric acid in the blood increased from 314.6 to 325.6 µmol/L. While this seems a relatively small increase in amount, it should be noted that it has occurred over a relatively short period of time and suggests that genetics is unlikely to account for this increase. A far more likely explanation is that lifestyle factors have driven up blood levels of uric acid in Irish people. We are more sedentary, more obese, consume more sugary drinks and are less physically active.”

Uric acid levels can be managed using a combination of lifestyle changes and medication.

Prevalence estimates were highest among elderly patients and those with severely impaired kidney function. The observed growth patterns were not accounted for by changing demographic and clinical profiles. These findings suggest that the burden of excess uric acid, known as hyperuricaemia, is increasing in the Irish health system. Given the emerging body of evidence linking hyperuricaemia to adverse clinical outcomes, the research team concluded that better management of uric acid and its determinants should be a major goal in order to improve patient outcomes.

A new study from the RCSI (Royal College of Surgeons in Ireland) Department of General Practice has found that people in Ireland are taking more prescribed medications now than they were 18 years ago. However, the research also revealed that despite this increase, the quality of prescribing medications in Ireland has improved with a marked 60% decreased risk associated with prescribing drugs in older people.

The research, which charted how prescribing has changed for medical card patients over a 15 year period, was developed by RCSI in conjunction with the Health Research Board (HRB) Centre for Primary Care Research and Trinity College Dublin (TCD), and was recently published in the BMJ Open. This study is based on data from the Health Service Executive Primary Care Reimbursement Service (HSE-PCRS).

The study also investigated potentially inappropriate prescribing (PIP), which is the use of a medication in a way that its risks outweigh its benefits, in those aged over 65. It was found that despite the surge in polypharmacy, a main driver of PIP, there was a 60% decrease in risk of PIP in the older Irish population. Given that polypharmacy has increased and that PIP risk has decreased, the study suggests that clinicians are now prescribing more appropriately.

The medications which have seen the highest prescription increases over the 15 year period of the study include statins for cholesterol, anti-platelet drugs such as aspirin and proton pump inhibitors for stomach acid. Prescriptions for drugs such as aspirin and digoxin, which when prescribed at higher doses are unlikely to provide further benefit but increase the risk of side effects, were found to decrease over the course of the study.

Speaking on the findings, the lead author of the study Frank Moriarty, HRB PhD Scholar in Health Services Research at the HRB Centre for Primary Care Research in RCSI, said “We have seen an escalation in the number of people, particularly those in middle and older age, taking multiple regular medicines in recent years and it is now normal for someone aged over 65 to be prescribed at least five different drugs. The more medicines a person is prescribed, the higher the chance of drug interactions, side effects or adverse events. So with more people taking complex combinations of drugs than ever before, it’s reassuring that the risk of potentially inappropriate prescribing has reduced when this is accounted for.”

Mr Moriarty added, “However, quality improvement strategies and interventions are needed to further improve prescribing appropriateness, particularly for PIP medicines that have increased or remained prevalent in the last 15 years, including non-steroidal anti-inflammatory drugs and benzodiazepines. Patients and doctors discussing and making decisions together may help to reduce any unnecessary drugs and lower the risk of prescribing problems.”

RCSI is ranked among the top 50 most international universities in the world (Times Higher Education University World Rankings, 2015-16). It is an international not-for-profit health sciences institution, with its headquarters in Dublin, focused on education and research to drive improvements in human health worldwide.

The Minister for Research and Innovation Mr Sean Sherlock TD has welcomed the launch of a National Policy Statement on Ensuring Research Integrity in Ireland. Ireland sits close to the world’s top research performing nations, in terms of research quality and impact related to its size. This policy statement aims to commit the main organisations in Irish research to the highest standards of integrity in carrying out their research so that partners and other stakeholders, and the international research community may have full confidence in the Irish research system.

Minister Sherlock said, “I am confident that the Policy Statement provides a gold standard for researchers in Ireland. It also provides a framework for inter-agency cooperation in this important area, and provides proof that Ireland is a serious player in the global research arena. I would like to congratulate the IUA, and all of the agencies and institutions involved in the initiative, on the production of a key policy document for our national research system”.

While this policy statement has been developed jointly by the IUA and the listed sponsors, it provides a robust framework which might usefully be adopted by other research performing organisations in Ireland.

However, the transparency of policy and practice will be enhanced by publication of a national statement which clarifies policy and sets out agreed good practice in promoting and ensuring research integrity. This commitment is shared by the universities, IoTI, DIT, Teagasc, RCSI and the main Irish research funding agencies; in particular, the Health Research Board, Science Foundation Ireland, Enterprise Ireland, the Higher Education Authority and the Royal Irish Academy.